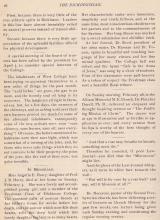 The March 1893 Dickinsonian published a section in memoriam of Angela E. Harry, a Freshman at Dickinson College and the daughter of Professor J. B. Harry. On February 5, 1893, Angela died in her home of a long illness. The Dickinsonian mentions fondly that her "characteristic traits were innocence simplicity and truth." The Freshman class sent her a beautiful floral tribute as a token of respect to her. 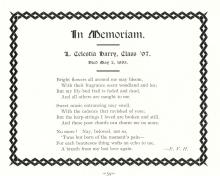 Emma V. Harry writes a memorium in honor of another sister of hers, Lydia Celestia Harry, who died May 2, 1895 in Carlisle. She had entered Dickinson's preparatory school in 1893 and would have graduated with the class of 1897. Angella Harry was another sister of Emma Harry who had died in 1893 at Carlisle. 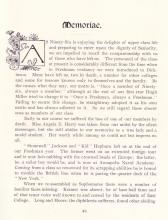 In the 1896 class history there is an included section to remember some of their fellow classmates, including a few women. The loss of Angella E. Harry is mentioned right away. They speak kindly of her presence on campus stating that "she still abides in our memories as a true lady and a model student. Her worth while among us could not but impress us all." Then they also mention two female students gone on to other colleges. The section states that an "A. R. 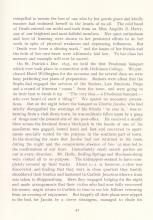 The Class of 1896 writes in their class history about the death of their fellow female classmate, Angella E. Harry. The classmates kindly remember Angella as "one of our brightest and most faithful members...her quiet enthusiasm and love of learning were shown in her persistent efforts to do her work in spite of physical weakness and depressing influences."

A year after the death of Emma V. Harry's sister, Angella Harry, she writes a poem about her sister in the Microcosm. Titled "The Vale of Rest", Emma describes the place "where our fair Angella sleeps" as well as her speculations on what heaven must be like. This is also the second poem Emma has printed in the 1894 Microcosm.

Written in the 1893 Microcosm is a memorium to Angella E. Harry, who would have graduated in 1896. The poem inserted was written by her sister, Emma V. Harry, who also attended Dickinson College and was in the class of 1895. Further documentation states that Angela died in Carlisle, but the cause of her death is not documented. Her death was also unmentioned in a following account of the class of 1896's events that year.