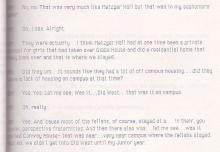 While the majority of the male population lived in fraternity houses on and off campus, their female counterparts resided in primarily off-campus establishements like Metzger Hall, which were located some blocks away from Dickinson. Due to the lack of housing and the influx of female students, the College began to house its female students in places such as Old West. Such was the case that was described by Sarah Andrews in her interview. Also, at the time there was no Sorority Housing in which they could have meetings and hold social events like the fraternities did.Â

According to Sara Andrews as explained in her interview, the Metzger Hall council was the established governing body for Metzger House. The council met on a regular basis as a means to address and simultaenously try to resolve any complaints presented by the student body. Dean Meredith often times reached the council in order to receive feedback or help in implementing disciplinatory regulations.