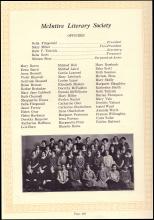 In the 1926 Microcosm, the McIntire Literary Society published a brief history of their organization. According to the organization's historian Amanda Wertz, the McIntire Literary Society was founded on January 5, 1921. On that day, the society was named, the constitution adopted, and the meeting time set for every Wednesday afternoon at 1:30. A very active organization, the literary society held programs dealing with "literary topics" and a debating team was established.