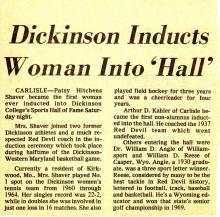 Patsy Hitchens Shaver (Class of 1964) became the first woman inducted into the Dickinson College Sports Hall of Fame on February 18, 1978.Â  Whille a student, she played tennis for four years, field hockey for three years, and was a member of the cheerleading squad for four years.Â  Her tennis singles record was 22-2, and her doubles record was 16-1.Â 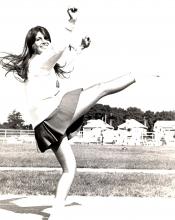 Dickinson cheerleader, Donna Di Vincenzo, '72, does a peppy kick for the camera in this photograph circa 1970.Â 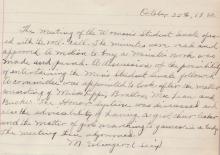 The minutes from the Women's Student Senate meeting on October 25, 1920 discuss issues brought to the association. One of these issues was the possibility of having a female cheerleader and what they should do about the matter. Another issue brought forth was the permission to allow females to march to games as a body. No resolution on either of these issues was documented in the minutes. 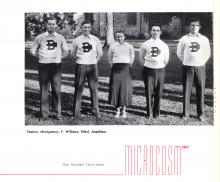