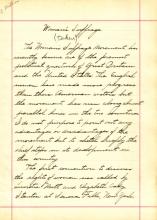 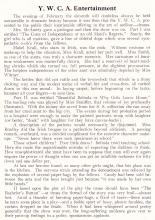 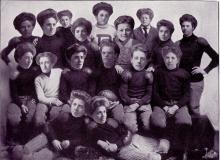 "The Freshman-Sophomore Co-ed Rush" is a humorous piece in the 1909 Microcosm that pokes fun at the tensions between the Freshman and Sophomore classes. The fight between the two classes broke out because of a Freshman singing and playing a song about their class pride. This causes an outrage amongst the Sophomores and a fight between all the women then ensues. Freshman and Sophomore women are ripping out hairpins and combs, carrying others away and pinning them against the wall. After some time, the Dean of Women, Mrs.