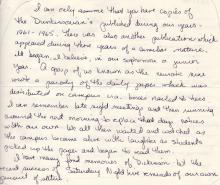 A female graduate of the class of 1965 remembers her involvement with the literary publications at Dickinson in her "Women as Leaders" survey. In addition to the Dickinsonian, she recalls another publication of a similar nature that appeared during her sophomore or junior years. It was a group known as the "neurotic nine" who wrote a parody of the daily paper. This unnamed paper was distributed on campus by boxes nailed to trees.