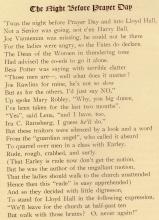 "The Night Before Prayer Day" is a humorous poem about the women's decision not to have male escorts to the Prayer Day event, causing quite an uproar on campus. In support of the Women's Suffrage Movement, the co-eds of the class of 1910 decided to escort themselves to Prayer Day, which is scandalous to not be escorted to the church by a male. The male students were trying to force the women to be escorted by them, but instead the women declared that, "We'll leave for the church at half-past ten, but walk with those brutes? O, never again!"