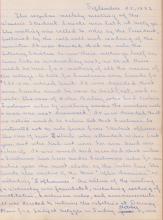 The September 25, 1922 minutes from the Women's Student Senate discussed various affairs, one particularly emphasized was the case of female freshmen rules. It was decided that freshmen women had to wear arm bands to breakfast and on their coats. Failure to comply with this rule caused the creation of the "freshman rule", as one woman learned. She had been a freshman at a previous college and then came here, refusing to wear her arm band.