Brief note in the Local section of the Dickinsonian: "Dr. Reed, Prof. Durell, and Mrs. Biddle, wife of Judge Biddle, acted as judges in the Inter-Society Debate at the Indian School. Question was, Resolved, 'That women have done more for the advancement of humanity than men.' The affirmative won." 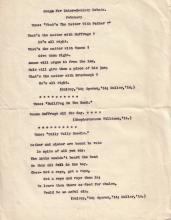 In honor of the Annual Inter-Society Debate pertaining to the question of women's suffrage, male Dickinsonians composed and performed songs regarding women's suffrage. The songs included "What's the Matter with Suffrage?", "Suffrage all the Day," etc.

The Inter-Society Debate took place on March 9, 1922 between the Harman Society (a female society created in 1896) and the McIntyre Society (also for women, founded in 1921- It appears to have only been active in 1921) at Bosler Hall. It discussed the enactment of a constitutional amendment for the protection of women against political, legal or civil discrimination due to their sex. Margaret Eslinger (this document came from her personal scrapbook of her Dickinson years) assisted Kathryn Smith '24 on the negative side of the argument.