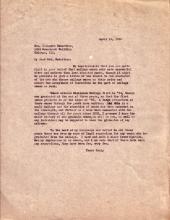 In a previous letter dated April 7, 1922, Eleanore Robinson, a reporter from Chicago, wrote President Morgan in reference to the marriage and divorce rates of female Dickinson Graduates. Robinson argued that college-educated women make better wives and mothers than women who do not attend college. On April 13, 1922, President Morgan responded to Robinson's letter. He agreed that educated women make better wives and mothers. 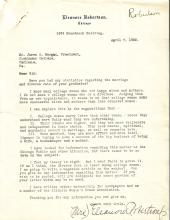 In a letter dated April 7, 1922, Eleanor Robinson (Illinois Women's Press Association) wrote to President James H. Morgan in reference to the marriage and divorce rates of female graduates of Dickinson College. Robinson explained that she knew many college women who were married and did not know a single college woman who was a divorcee. She argued, "Judging then from my own acquaintance, it seems to me that college women make more successful wives and mothers than less educated women."She then went on to explain her argument.