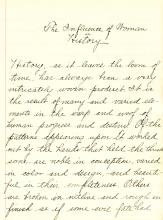 In his senior Oraton "The Influence of Women in History" Charles Stewart Davison discussed women's role in history. Though often not included in history books, he argued that women greatly influenced events in history. He cites such women as Eve, Catherine de Medici, and Joan of Arc. He concluded his oration and wrote that "Such is a hasty glance at the influence of woman in the past.Â  If she advances to the position she should rightly hold, the future will see her occupying a station of still higher honor and influence."