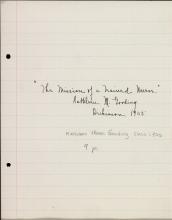 In her essay titled "The Mission of a Trained Nurse," Kathleen Moore Gooding described the importance and progression of nursing in the United States. According to Gooding, prior to the nursing profession, monks and uneducated people cared for the sick. This led to much pain, sickness, and even death. However, it was not until Florence Nightingale that women became nurses and the profession took off. In closing, she highlighted the work of the Red Cross as proof of the success of the nursing profession.