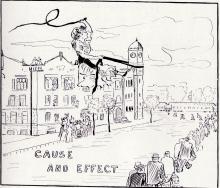 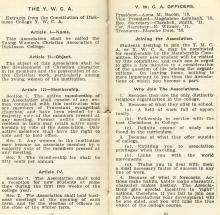 The 1909-10 student handbook, produced by the Christian
Associations contains parts of the constitution from the Young Women's
Christian Association (YWCA). Included in the handbook is the YWCA's
mission as well as information on membership, officers, and committees.
Officers included are, President Anna M. Bacon, Vice-president Magdalene Leinbach,
Secretary Clara Bell Smith, and Treasurer Blanche Dum. A brief
synopsis ofÂ  the Pan-hellenic league, formed by sororities Pi Beta Phi
and Omega Chi, are mentioned in this years handbook. The Pan-Hellenic