Dean Ernest A. Vuilleumier reports to the Board of Trustees that the college was operating four separate buildings--Metzger Hall, the Gibbs House, the Parker House, and the Phi Delta Theta House--as women's dormitories. The dean viewed this situation as unsatisfactory and argued for "the very great need for a new dormitory for women." He urged the Board to make plans for the construction of a women's dormitory as soon as possible. 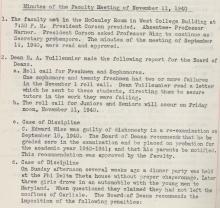 In the "Minutes of the Faculty Meeting of November 11, 1940," the Board of Deans reviewed a case of discipline in which the Phi Delta Theta house hosted a party "without proper chaperonage" followed by a jaunt in an automobile. The two female students who left Carlisle in the automobile received probation for the rest of academic year 1940-41 and were placed under "special regulations" in Metzger Hall. Another student, who did not leave in the automobile, only received probation "until Christmas." 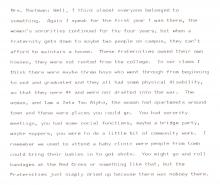