The Inter-Society Debate took place on March 9, 1922 between the Harman Society (a female society created in 1896) and the McIntyre Society (also for women, founded in 1921- It appears to have only been active in 1921) at Bosler Hall. It discussed the enactment of a constitutional amendment for the protection of women against political, legal or civil discrimination due to their sex. Margaret Eslinger (this document came from her personal scrapbook of her Dickinson years) assisted Kathryn Smith '24 on the negative side of the argument. 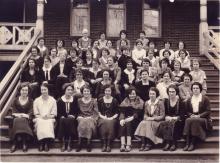 In the 1922 constitution and by-laws of the Women's Student Government Association, printed in the student handbook, is the inclusion of a "motto." The motto, "good morals and good behavior" is a new addition to the constitution since its initial creation in 1921. The rest of the constitution contains information on membership, meetings, the executive, lesgislative, and judicial departments, dues, amendment rules and by-laws.

According the the 1922-23 student handbook, published by the college's Christian organizations, two women's debating teams were formed in 1921. After competitive try-outs, one team from the Harman Literary Society and one team from the McIntyre Literary Society were selected as the two teams to represent the school. The Harmon debating team included: Esther Reigel, Laura High, Elizabeth McCrea,Â  and Eleanor Klemm. Members of the McIntyre debate team were, Elizabeth DeMaris, Kathryn Smith, Margaret Eslinger, and Mary Garland. 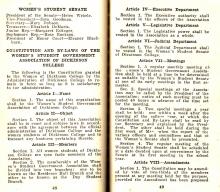 Under the Women's Student Senate, a separate organization from student
senate that governed male students, the Women's Student Government
Association of Dickinson College sought to "enact and enforce laws in
accordance with the agreement between the official administration of
Dickinson College and the women students of Dickinson and to transact
any business pertaining thereto." This constitution, printed in the
student handbook of 1921-22, included information on membership, meetings,
the executive, lesgislative, and judicial departments, dues, amendment