Another Dorm for Women 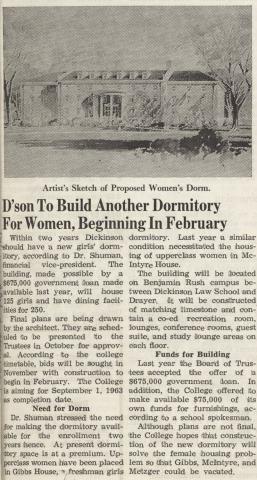 An article in The Dickinsonian reported that the college planned to build another new dormitory for women over the next two years, beginning in February.  The financial vice-president, Dr. Shuman, explained that the building was made possible by a $675,000 government loan. According to Shuman, the dormitory needed to be available for enrollment in two years due to the current lack of living space, which "necessitated the housing of upperclass women in McIntyre House." They planned to construct the building between Drayer Hall and the Dickinson Law School and would include a co-educational recreation room, lounges, conference rooms, a guest suite, and study lounge areas.