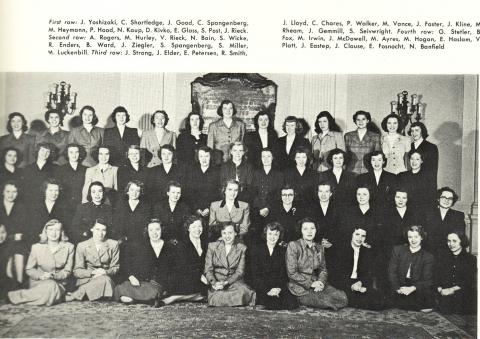 In 1950 the women of the Beta Delta chapter of Phi Mu kept busy with a variety of social, athletic, and service-related activities.  In the past year they celebrated the 30th anniversary of their chapter's installation, created and ran a "Toycart" in the children's ward of the Carlisle Hospital, and caputred the Interfraternity Basketball Cup for 1949.  The chapter also held possession of the Pi Beta Phi Scholarship Cup for the third consecutive year.  Members of the chapter who served as executive officers in 1950 included Rosalie R. Enders, president; Barbara J. Ward, vice-president; Joyce A. Ziegler, secretary; and Shirley J. Wicke, treasurer.