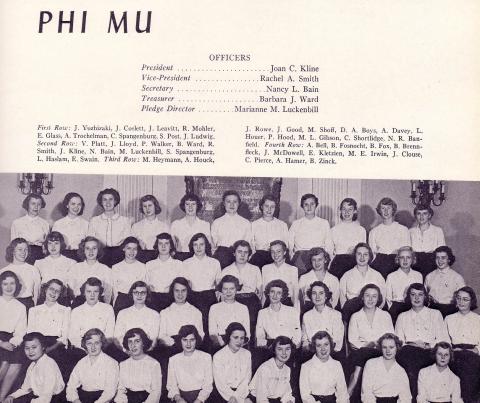 In 1951 the members of the Beta Delta Chapter of Phi Mu continued to dedicate themselves to philanthropic and social projects inspired by their national chapter.  Their philanthropic work in 1951 included maintaining a "toy cart" at the Carlisle Hospital and making weekly visits to a local orphanage.  Phi Mu pledges participated in the Pan-Hellenic Doll Dance, winning a trophy for their efforts.  The executive officers of Phi Mu in 1951 were Joan C. Kline, president; Rachel A. Smith, vice-president; Nancy L. Bain, secretary; and Barbara J. Ward, treasurer.  In addition, Phi Mu had an executive position for Pledge Director in 1951, a position which was filled by Marianne M. Luckenbill.

Location of Document in Archives
Microcosm 1951