"I Dieted in Secret" 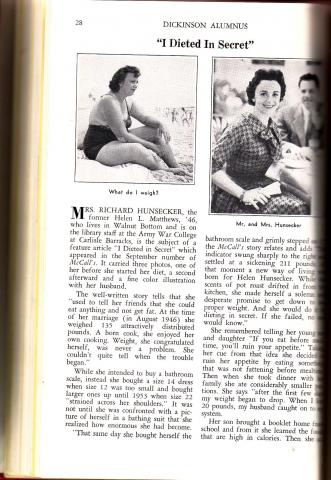 Mrs. Richard Hunsecker, formerly Helen L. Matthews, of the class of 1946, was featured in McCall's magazine in an article entitled "I Dieted in Secret."  The article tells the story of Hunsecker's realization that she had become overweight, and her subsequent decision to diet without telling anybody.  Hunsecker ate smaller portions at dinner, cut out foods that were high in calories, and refused to talk about it with her friends so that dieting became neither a "bore" or an "obsession."  The before-diet and after-diet pictures in the magazine show that the diet was very effective for Mrs. Hunsecker.  Hunsecker worked on the library staff at the US Army War College at the Carlisle Barracks.