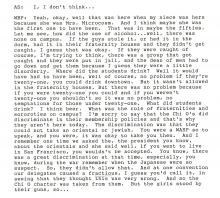 Wilma B. Prescott (Class of 1945) recalls in an interview that Professor Milton Walker Eddy of the Biology Department never flunked a female student in his class. Prescott refers to the professor as a legend and claims that he was called by the attorney to solve cases by using strands of hair. According to Prescott, Professor Eddy "felt sorry for those girls who had to take it [the required course] and weren't, did not have that bent." 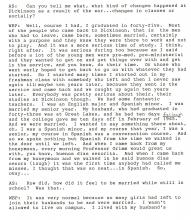 Wilma B. Prescott (Class of 1945) shares in an interview how she married her husband during her senior year at Dickinson. Her husband had graduated in 1943 and was at the Great Lakes. When he had ten days furlough in February 1945, Prescott took ten days off to marry him. When she returned from her honeymoon, Professor Grimm, who taught Spanish, greeted her, "Buenos dias, senora," referring to her marital status. Prescott reports that it was normal to be married while still attending college. Other female students married their husbands-to-be.