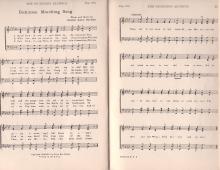 The "Dickinson Marching Song" was introduced by the Glee Club under the direction of Professor C. E. Wass, and presented to the entire student body.
The song was written and composed by Mrs. Helen Hall Bucher of Boiling Springs, PA - the mother of Helen Bucher Malcolm, who died before graduating but would have been part of the class of 1915.
Â
Â