The event of the Junior Oratorical Contest of 1891 was documented in the July issue of the Dickinsonian. Minnie Mack was the first speaker, who chose her subject to be "Woman's Work and Woman's Wages," which stirred much interest in those listening. She spoke on the "great injustice done to women, who...very often performing the same labor as men, yet received much less compensation." Minnie Mack then further comments on the changing times, how now women are more fitted for "mechanical or professional work" than the chief role of adorning a house. 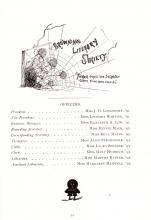 The Browning Literary Society was the first mention in the 1890 Microcosm of a society with female involvment. The society was completely comprised of women. It seems that almost all the women who were on campus were involved with the Browning Literary Society. The President was Jessica Dale Longsdorff, Vice-President was Leonora Whiting, Business Manager was Elizabeth A.