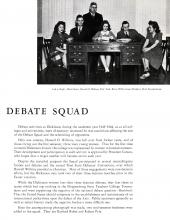 The Microcosm's page on the Debate Squad referenced the effect of World War II on the size of the team. As a result of the lack of male "veterans," three women tried out for the team during the first semester and were the first women "in recent history" to represent Dickinson in forensic contests. According to the Microcosm, President Corson approved their participation in the debate squad and hoped that more women would become involved every year.