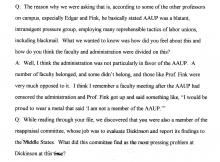 Biology Professor Barbara McDonald, who began to work in Dickinson during the Fall of 1956, in her interview reiterated that she was a member of the AAUP as well as an active member of the reppraisal committee. The American Association of University Professors who upholds academic freedom and tenure for College or University professors, played a pivotal role in the "Le Vallee Affair" during the Spring of 1956.

As explained in her interview, Professor Barbara McDonald, who began teaching at Dickinson during the Fall of 1956, described the atmosphere of the campus post the "La Vallee Affair" as being one of widespread conflicting feelings. At the time, being one of the few female faculty members at Dickinson, Professor McDonald did not become conscious of the predominance of men for "it just seemed to be the way it was." Even though there were a large amount of female students enrolled in general biology classes "there were very few women on the faculty."