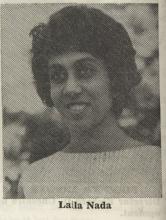 An article in The Dickinsonian chronicles the Dickinson adventures of Laila Nada, a freshman co-ed from Egypt who had never left her country before coming to Dickinson. A biology major, the international co-ed wanted to continue her education after Dickinson and planned to remain in the United States over the summer. She reported that Dickinson students were more friendly than Egyptians and admitted that she would like to see a women's swimming team at Dickinson.