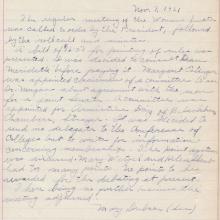 On November 7, 1921 the minutes for the Women's Student Senate were documented and the idea of a joint Senate was brought forth. Margaret Eslinger was appointed the chairman of a committee that would talk to President Morgan about joining the women's Student Senate with the men's. No conclusion to the joint senate idea was mentioned in these minutes.