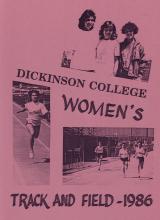 The Women's Track and Field team had a record of six wins and two losses in 1986. Under Coaches John Cantalupi, Larry Moser, Dick Ocker, Scott Thornsley, and Dave Bengston, the team won first place in a Division III competition at Moravian. Linda Reinman was the 1986 MVP, and the coach's awards went to Cyndi Lyn Olcott, Susan Baldwin, and Michelle Wolkomir. Linda Reinman continued her successful Track and Field career as a Division III National Qualifier alongside Susan Baldwin. 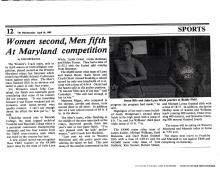 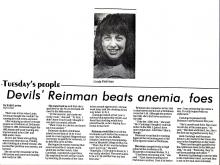 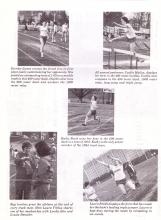 The 1984 yearbook for the Women's Track and Field team spotlights performances and moments from the season with pictures and captions. Featured athletes include "all-around performer" Caitlin Mullen, lead triple jumper Laurie Smith, and "Dickinson's number one threat in the 5000 meter event," Helen Turner. 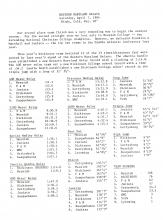 In 1984, the Women's Track and Field Team boasted four wins and two losses as an overall record for the season. Captains Stacey Camillo, Jennifer Kulp, and Julie-Lynn Wirth and coaches John Cantalupi, Larry Moser, and Don Nichter led the team through a successful season that began at the Western Maryland Relays on April 7 where the team placed second. One foreign student--Carina Palmqvist of Sweden--participated in events like the 55m Dash. 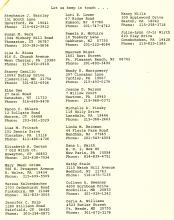 Included as the last page of the Women's Track and Field yearbook for 1983 is list of the names and contact information for the female athletes. The page is entitled "Let us keep in touch..." and lists all 24 members of the team, including the captains and MVP Jennifer Kulp.

The Women's Track and Field yearbook from 1983 highlights the accomplishments of the team for the season. Under captains Sue Berg, Elizabeth Garten, and Linda Reinman, the team had an overall record of three wins and six losses and a Mid-Atlantic Conference record of three wins and six losses. Freshman Jennifer Kulp, the 1983 MVP for the team, performed outstandingly in high jump, long jump, hurdles, and the 400-yard relay.