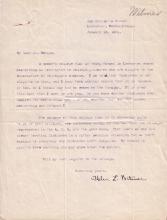 On January 13, 1921, Dickinson alumna Helen L. Witmer wrote to President Henry Morgan requesting information pertaining to Dickinson's relationship with the Association for Collegiate Alumnae (ACA). According to Witmer, a women's college club was recently formed in Lancaster, PA. However, only women who attended institutions affiliated with the ACA were permitted to join the association. Witmer was told the Dickinson College was not allowed to to join the ACA because the school does not hire female faculty members.