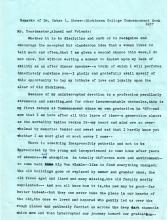 In her speech delivered during a 1937 Commencementt Week Dinner, Zatae Longsdorff Straw remembers her time at Dickinson College. In the beginning of the speech, Straw admits that this was her first time back to Dickinson since she graduated in 1887. Thus, her mind flooded with memories of Dickinson during her 1937 visit. As the first female graduate, Straw described the harassment she received from her male counterparts. She described many of the faculty including Dr. Rittenhouse whose "eyes filled with tears" when male students treated her unkindly. Dr.