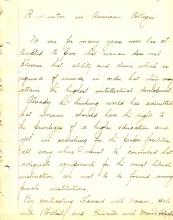 In his senior oration "Co-education in American Colleges," Frank Moore (class of 1891) argued in favor of co-education in America. He first contended that women's college's were not up to par with their male counterparts. Instead of improving the women's institutions, he believed that Americans should send women to coeducational institutions.Â  This would allow for the further improvement of formerly male institutions.Â  Secondly, Moore asserted that coeducation would better prepare women for living in a man's world.