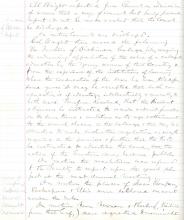 At the third session of the annual meeting of the Board of Trustees in 1877, Colonel J.A. Wright presented the report on behalf of the Committee on the Admission of Women.

During the second session of the annual meeting of the Board of Trustees in 1876, General James Fowler Rusling moved for the appointment of a committee of three to "consider the advisability of admitting ladies to the studies of the college or of making some provision for conferring degrees upon bodies." Rusling suggested that Colonel Wright, a member of the Board, lead the committee as Chairman. The motion was carried and the president appointed Colonel John Armstrong Wright, Charles Joseph Baker Esq., Reverend John Wilson to the committee.