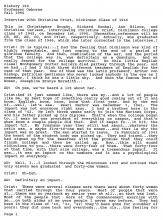 In an interview with Christine Crist (Class of 1946), the Dickinson graduate describes life at Dickinson College when a majority of the male students left for World War II. She guesses that the ratio of men to women prior to the war was five-to-one and reports that, in 1943, "the heart of the student body was picked up." In 1945, 11 men and 41 women graduated from Dickinson College, reflecting the male-to-female ratio after the war began.