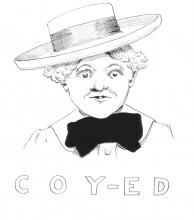 In an article published in The Onion (an alternative paper published by the Sophomore Band), the author refers to female Dickinsonians as "Lloyd Hall Skirts." He goes on to desribe a female student being tricked by a male student.

A parody on the Junior Oratorical Contest was written in 1886, and taunts Zatae Longsdorff's participation in it. One of the main features of this "event" isÂ  Zatae singing the opening song, "Wait Till the Clouds Roll By." For the purposes of this parody, her oration is renamed from "Hand Workers vs. Head Workers" to "Head Work Verses Pony Work," and that she is labeled as "Our Pride When Absent." Zatae is finally mentioned in "Dramatis Personae" as stating, "I'm a Co-ed; I want a medal." 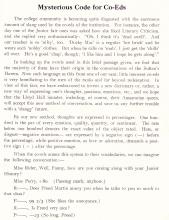 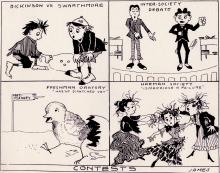 A section of the 1907 Microcosm included cartoons of various organizations and the types of fictitious contests they would be involved with. One window of the cartoon depicts the Harman Literary Society in a heated debate over the question of "Is Marriage a Failure."

A fictitious meeting that the Harman Literary Society had was published in the 1905 Microcosm. The piece completely makes fun of the society, and some of the women involved with it. At their meeting, the women apparently held a debate on whether "Promiscuous Kissing is a Good Thing." One side argued that kissing is "conductive to good health...exercises the kissers" and gives personal experience. 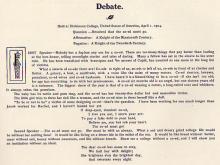 The Microcosm satirically writes about a fictitious debate on the question that is to be "resolved that the co-ed must go." The first "speaker" begins by complaining that there are too many co-eds around they are "to the right...to the left of us...co-ed doctors, lawyers, preachers, [and] wives..." and that they need to go. The second "speaker" argues against the first, saying that the co-ed "must be with us always" because college life would be "sad and dreary" without their smiling faces.