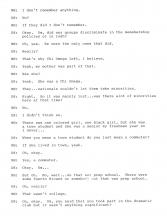 In an interview, Mary Synder Hertzler reports that groups at Dickinson College did discriminate in membership policies or in rush during the World War II period. "We were the only ones that did," says Hertzler of her sorority, the Pi Phis. The Chi Omega sorority "left," according to Hertzler, because the national chapter prohibited the extension of membership to minorities. Hertzler initially claims to remember one woman of color at Dickinson College but later revokes that statement, recalling that there "were some Puerto Ricans or somebody" at prep school. 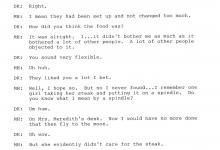 While interviewee Mary Synder Hertzler did not mind the quality of the food at Dickinson's dining hall during the World War II period, not every student agreed with her. Other students "objected" to the food, and one female student took her steak and put it on a spindle on Dean Josephine Brunyate Meredith's desk. Hertzler claims that she "would have no more done that than fly to the moon." This student "evidently didn't care for the steak." 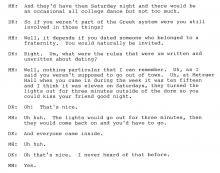 Mary Snyder Hertzler describes social and dating life at Dickinson during World War II in an interview. Women could not wear slacks during that period. Mary VanAuken was the only exception as she took flying lessons. During the winter, women wore heavy socks to stay warm as they walked from Metzger Hall, located off-campus, to their classes. Men lived on campus. Hertzler, her beau, and two other couples were once caught by Dean Josephine Brunyate Meredith at Snyder's Drug Store in Mount Holly.