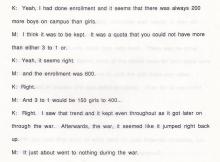 According to Maragaret McAdoo's experience while on Dickinson as recorded on her interview, she observed that there always seem to be 200 more men than women on the Dickinson campus. She further elaborated by stating that a quota was implemented that the male female ratio could not be more than 3 to 1. Thus, out of a total enrollment of 600, women only made up 150 out of the total student body population. This trend, she said, continued even as the Second World War persisted.

The "New Gym", as it was referred to at that time, was the locale of which all soon to be graduating women of Dickinson rushed to, weeks before graduation in order to complete their physical education requirement. As reminisced by Margaret McAdoo in her interview, this regulation implemented by the college required that all women learn how to swim in order to graduate. (Ironically it is important to note that Dickinson did not have a womens swim team at the time).