Founding of the Black Alumni Association of Dickinson College 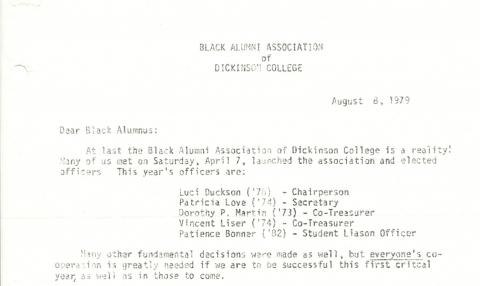 Interesting to note is that the majority of the elected officers are women, including; Chairperson, Luci Duckson ('78), Secretary, Patricia Love ('74), Co-Treasurer, Dorothy P. Martin ('73), [Vincent Liser ('74) was the other Co-Treasurer], and Student Liason Officer, Patience Bonner ('82).

Their initial short term goals included "the planning and organization of a major Black Alumni Reunion in the spring of 1980 and the launching of a national fund-raising to establish and award the Malcom X-Martin Luther King, Jr. Scholarship by September of 1980."

The letter stressed the importance of monetary contributions from group members and informed constituents to look out for a twice yearly newsletter that would inform members of "happenings in the Association and in the lives of the Black alumni."

Women were definitely an integral part in the establishment of this organization in that 10 women and 6 men were present at the first meeting of the Black Alumni Association of Dickinson College.

What happened to the organization, and why does it no longer exist?

That is a very good question. We do not yet know what became of the Black Alumni Association.
Malinda TrillerSpecial Collections Librarianarchives@dickinson.eduÂ