Sex and the College Girl 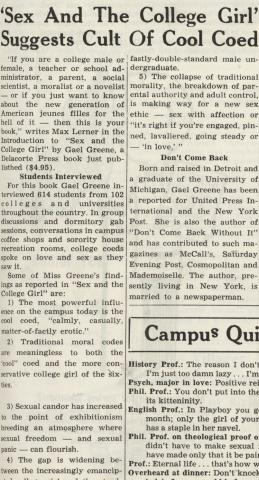 A Dickinsonian reporter summarized the book Sex and the College Girl by Gael Greene. According to the article, entitled "'Sex and the College Girl' Suggests Cult of Cool Coed," discusses Greene's findings. Greene, who interviewed 614 students on 102 campuses, discovered that the breakdown of traditional morality was "making way for a new sex ethic--sex with affection or 'it's right if you're engaged, pinned, lavaliered, going steady or--'in love'..."