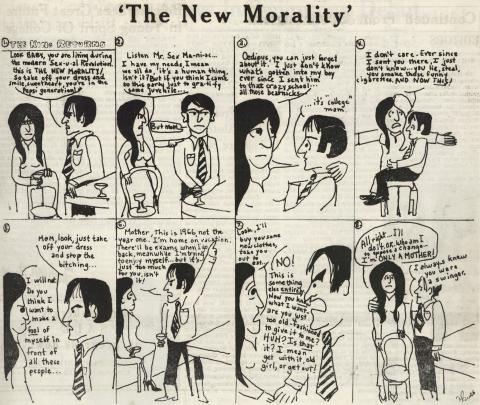 A one-page article advertising the upcoming Public Affairs Symposium in The Dickinsonian featured brief glimpses at the views of the symposium's speakers on "New Morality" and included a cartoon that was intended to capture some of the issues under discussion. In the cartoon, a man approaches a woman, saying, "Look baby, you are living during the modern Sex-u-al Revolution. This is the New Morality! So take of fyoru dress and smile, sweetheart, you're in the Pepsi generation!" The woman counters the man, explaining that women have needs as well. The cartoon also works in some Freudian pyschology with the man's Oedipal complex. Finally, under pressure from the man, the woman concedes, "All right...I'll do it...Who am I to oppose a change...I'm only a mother!" The article frames the entire discussion in terms of the Pill and the changes it "wrought" on history.