In The Dickinsonian, the "Twinings" sections lists couples who have become pinned or engaged. This issue of newspaper also features those who have been "safety pinned." In this case, Darla and Bill Paterson gave birth to Scott William.

Under a section entitled "Twinings" in The Dickinsonian, the editorial staff listed campus marriages, engagements, and pinnings. 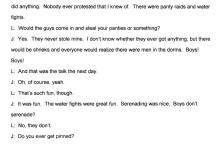 Jane Myers Sellers (Class of 1955) describes in an interview the relationship male and female students had at Dickinson during the 1950s. She reports that there were panty raids, water fights, and serenading. During these so-called "panty raids," men would invade the women's dormitories and steal panties.