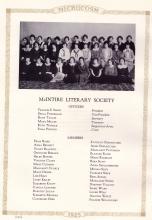 Founded in 1925, the McIntire Literary Society was depicted in the 1924 Microcosm. Frances Smith, Evelyn Wardel, Della Fitzgerald, Ruth Taylor, Mary Miller, Ruth Teitrick, and Erma Porteus served as officers during the 1923-1924 school year. The society was comprised of forty members.

Founded in 1921, the McIntire Literary Society was depicted in the 1924 Microcosm. Evelyn Wardel, Mable Fitzgerald, Margaret Paul, Francis Smith, and Anna Hoke served as officers during the 1923-1924 school year. The society was comprised of forty members. 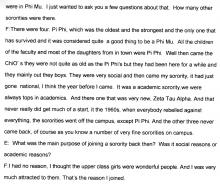 Frances Vuilleumier (Class of 1924) reports in an interview that Dickinson had four sororities: Pi Phi, Chi Omega, Phi Mu, and Zeta Tua Alpha. She characterizes Pi Phi as the oldest and strongest sorority as well as the only sorority that "survived." According to Vuilleumier, "it was considered quite a good thing to be a Pi [Phi]," and daughters of faculty members often joined Pi Phi. Chi Omega, explains Vuilleumier, was not as old as Pi Phi. Vuilleumier claims that its members were "very social." Vuilleumier's sorority, Phi Mu, was a newer sorority and was always academic.

Frances Vuilleumier (Class of 1924) claims in an interview that the college viewed men and women equally in the 1920s. She believes faculty like female students because they performed better in the classroom than their male colleagues. Frances recalls completing the same academic work as male students did. 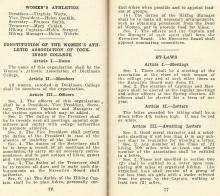 The constitution and by-laws of the Women's Athletic Association of Dickinson College are printed in the 1921-22 student handbook. The constitution details rules concerning membership, officers and their obligations to the positions they hold. Virginia Watts served as president for the organization and was responsible for meetings, appointing committees, and acting as a liason to "college authorities to promote athletics." Helen Conklin was Vice-president, Frances Smith served as secretary, Mary Cohick as Treasurer, Helen Strayer as hiking captain, and Helen Wehrle as hiking manager.