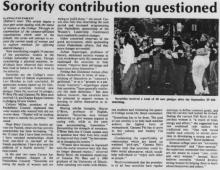 This article is the first in a four-part series exploring the status of women at Dickinson College. The President's Commission on the Status of Women observed that even though women hold the majority on campus, they tend to act like they are in the minority. The article also noted that "Dickinson women often define themselves in terms of men - thinking of themselves as 'someone's girlfriend' or as a 'groupie to a particular fraternity.'" Some professors and students felt that sororities contributed to this atmosphere on campus and reinforce this in women.