A Loss to Dickinson 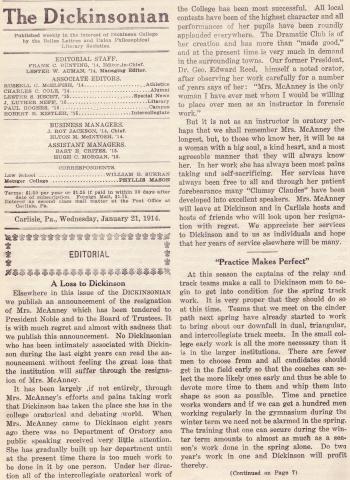 The January 21, 1914 Dickinsonian marks with sadness the resignation of Lucretia McAnney, who held various positions at the college. For the past eight years, McAnney had been in charge of the Department of Oratory. Before her, "there was no Department of Oratory" but she had "gradually built up her department until at the present time there is too much work...[for] one person." Even the former President, Dr. George Edward Reed, remarked fondly that McAnney was "the only woman I have ever met whom I would be willing to place over men as an instructor in forensic work."

Location of Document in Archives
The Dickinsonian, January 1914