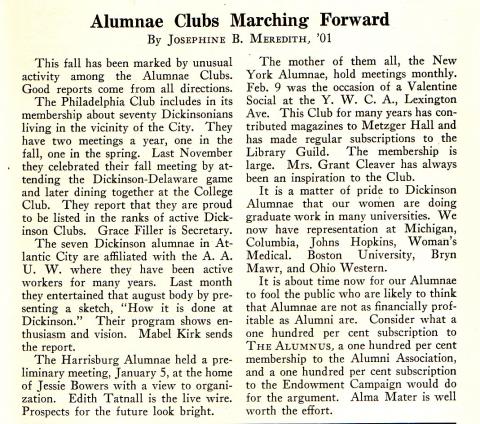 Alumnae of the college would form active Dickinson Clubs in the cities they moved to and habitually reported to the 'Alumnus.'The Philadelphia Club included about 70 Dickinsonians who lived in the vicinity in 1923. They met twice a year. Grace Filler, class of 1910, was secretary.In Atlantic City, there were 7 Dickinson Alumnae, all of which were affiliated and worked actively with the A. A. U. W. (American Association for University Women). Mabel Kirk, class of 1905, sent the report of a sketch they presented to the 'Alumnus.'"The Harrisburg Alumnae held a preliminary meeting on January 5 at the home of Jessie Bowers with" the the goal for a future organization. The New York Alumnae would meet on a monthly basis. They were regular magazine contributers to Metzger Hall. Moreover, there were reports of Dickinson Women Alumnae who were doing graduate work in many universities such as: Michigan, Columbia, Johns Hopkins, Woman's Medical, Boston University, Bryn Mawr and Ohio Western.

[The article in the Dickinson Alumnus which addressed this information was written by Josephine B. Meredith, class of 1901.]