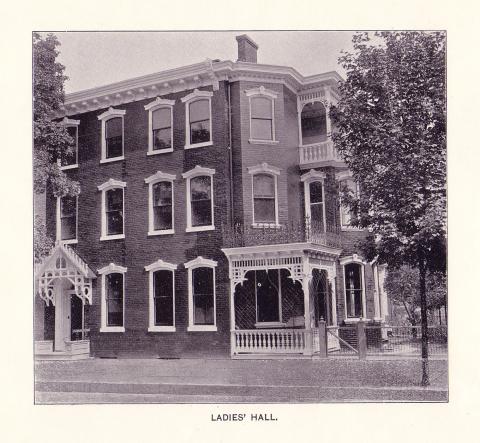 On one of the first pages of the 1896 Microcosm is a picture of the Ladies' Hall, located somewhere on West Pomfret Street in Carlisle. It was purchased by President George E. Reed on May 16, 1893 for $5,000 from Samuel M. Hepburn . Originally it was used to house a local fraternity, Alpha Zeta Phi, but then in 1895 it was turned into a residence for women. The building was called "Ladies' Hall" until February 7, 1905, when it was renamed in honor of John Zacharias Lloyd. He was a recently deceased Methodist clergyman and trustee who bequeathed $10,000 to the College. In 1919 the house was sold and razed fifty years later.    In the introduction on the Microcosm, they mention the establishment of co-education and the new women's dormitory in the college's history. It states, "In 1884 co-education was established at the college and, though for a time not largely patronized it has now assumed alarming proportions. In fact the co-eds occupy a beautiful new dormitory purchased by the college, and it looks very much as though they were here "bag and baggage." But who is sorry, for they are now one of the chief attractions of the college, and if their future usefulness can in any way be foretold by quoting the heading of an article in the New York 'Sun' on one of our graduates surely they will be an honor to Dickinson."

Location of Document in Archives
1896 Microcosm