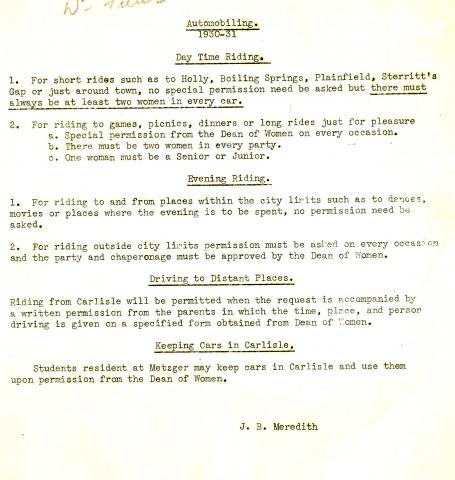 This document, provided by Dean Josephine Meredith, details the regulations for "automobiling." Regulations were implemented for daytime riding, evening riding, driving to distant places, and finally on maintaining vehicles at Dickinson. Female students were allowed to travel without securing permission during the day, as long as there were a minimum of two female students, and during the evening (as long as it was within city limits). Special permission was needed from the Dean of Women if female students were traveling long distances during the day. If traveling a long distance at night, a special permission form was needed by the Dean of Women from the students parents. Finally, students living in Metzger hall were allowed to keep cars in Carlisle but required permission from the Dean of Women to use them.