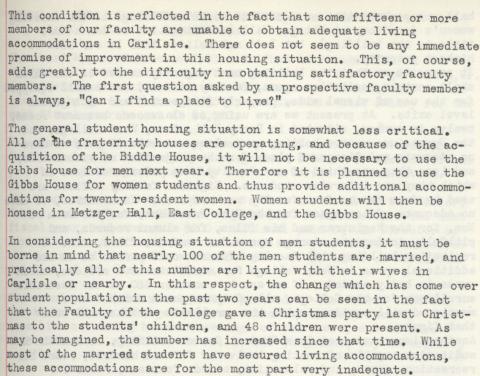 President William W. Edel reported the inadequate housing situation to the Board of Trustees. The president explained that the lack of housing in Carlisle made it difficult to attract prospective professors. Due to the fact that male students would not occupy the Gibbs House during the next academic year, the college planned to use it to house 20 female students. This change would mean that women students would reside in Metzger Hall, East College, and the Gibbs House. Moreover, the president highlighted the large number of male students who were married and lived in Carlisle with their wives. According to the president, their housing situation was "for the most part very inadequate."

Location of Document in Archives
Board of Trustee Minutes June 6, 1947