The Dickinsonian reports that two female students, Alice Abbott and Ann Housman, were among those who signed up to take a Civil Aeronautics Authority flying course at Dickinson.Â  Professor Wellington Parlin, a member of the Dickinson Physics Department, will teach a portion of the course.Â  The article specifically notes that the women "have been given the authority of President Corson to participate."

The 1941 Microcosm catalogues Josephine B. Meredith as the Dean of Women, the only female dean at Dickinson College. Meredith was also one of two female professors currently teaching on campus, the other being Mary Ganoe Rehfuss, the Director of Physical Education for Women. The Microcosm notes that Meredith, an Associate Professor of English, was known on campus for her "forceful personality and executive ability" which "shaped the Dickinson collegiate world". 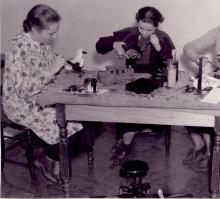 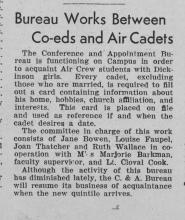 During World War II, Air Crew Cadets received training on Dickinson's campus. According to this Dickinsonian article, all unmarried cadets were required to register a record of their hobbies and interests with the Conferece and Appointment Bureau to be "placed on file and used as a reference if and when the cadet desires a date."Â  The committee responsible included Jane Bowen, Louise Faupel, Joan Thatcher, and Ruth Wallace.Â  Marjorie Barkman and Lt. Cloval Cook served as faculty/administrative supervisors.Â 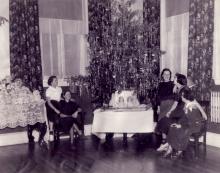 This photo is of a group of female Dickinsonians celebrating Christmas. The caption below the photo reads, "Christmas at the Women's Dormitory." 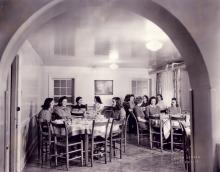 This photograph depicts a group of female Dickinsonians dinning in Metzger Hall's Dinning Room. According to the note on the back,Â  this is one end of the Dining Room. 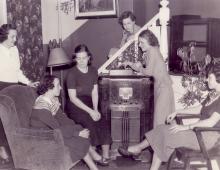 This photo is of a group of female students sitting around the radio at Metzger Hall. The women in the picture are not identified.
Â

This photo depicts female Dickinsonians studying in a dorm. The names of the women in the photo are unknown. 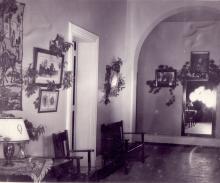 This photo depicts the front ahll of the women's dormitory. The caption below reads that the house is "decorated for Christmas."