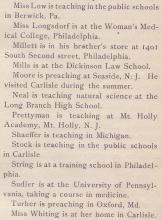 The whereabouts of the graduated class of 1891 is documented by the October 1891 issue of the Dickinsonian. Three of the female students are among the other graduates mentioned. Elizabeth Low is mentioned as a teacher in the public schools in Berwick, Pennsylvania, Jessica Longsdorff is studying at the Woman's Medical College in Philadelphia and Lenora Whiting is staying at her home in Carlisle.

The event of the Junior Oratorical Contest of 1891 was documented in the July issue of the Dickinsonian. Minnie Mack was the first speaker, who chose her subject to be "Woman's Work and Woman's Wages," which stirred much interest in those listening. She spoke on the "great injustice done to women, who...very often performing the same labor as men, yet received much less compensation." Minnie Mack then further comments on the changing times, how now women are more fitted for "mechanical or professional work" than the chief role of adorning a house.

The June 1891 Dickinsonian in the "Alumni Personals" section, included a brief paragraph on Hildegarde Longsdorff, one of the sisters of Zatae Longsdorff. The 1888 graduate, had recently graduated from the Women's Medical College of Philadelphia and intended on "practicing her profession" in Carlisle. 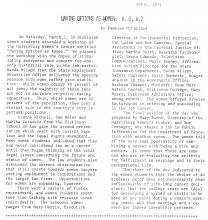 Thirty female Dickinson students attended a workshop at the Harrisburg Womenâ€™s Center entitled â€œHaving Options as Womenâ€ on Saturday March 2, 1974, reports the Womenâ€™s Newsletter.Â  The goal of the workshop was to stimulate awareness and concern for womenâ€™s roles in the job market.Â  At the event, women were encouraged to strive for positions in decision or policy-making positions.Â  Resource women were available to speak with students on an individual basis at the workshop about developing many different skills to allow for the possibility of different career options.

â€œOn December 1, five Dickinson women attended a symposium in Newark, New Jersey, entitled â€˜The Momentum of Women in Medicine,â€™â€ reports Kathy Rosen in the Womenâ€™s Newsletter.Â  The symposium was given by the American Medical Womenâ€™s Association of the New Jersey Medical School and gave pre-med women a closer look into the medical profession from the points of view of female doctors.Â  Rosen says the experience was â€œtruly enlighteningâ€ and that many of their questions regarding the medical profession and life as a doctor were answered. 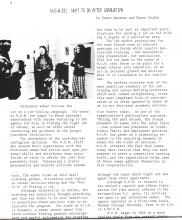 The Dickinson Womenâ€™s Newsletter is a monthly issued pamphlet, published by The Advisory and Planning Committee on Womenâ€™s Programs at Dickinson College.Â  The January, â€˜74 issue, documents an invaluableÂ  trip that 40 female students took to Washington D.C. where they gained insight to the current job market, the â€œhow-toâ€™sâ€ of finding a job, and specifically the opportunities for women in the Washington metropolitan area.Â  The dynamic staff at W.O.W.

In The Dickinsonian, an article entitled "Statistical Survey Shows Men Spend Money on Women" begins "That it is a man's world every woman sometime or another admits." A senior at the college conducted a survey for a statistics class in which he asked 132 men and 72 women how much money they earned during summer months and how much of it they spent on various expenses througout the schoolyear. Dickinson co-eds, he found, earned less than their male counterparts over the summer. Women, however, spent more for tuition and living expenses than men.

Ivy M. Hudson, class of 1923, went on to teach American History in the Dover Junior HIgh School in Dover, Delaware.

Dr. Julia Morgan, graduate of 1911, had a post in Tsinanfu, Shantung. She remained there and continued working until she was ordered out by the Consul. When this happened, she set on her way home by way of Europe.

Lydia M. Gooding, class of 1910, became the librarian for Dickinson College; however, after some time working there she decided to return to school.
She became a student at School of Columbia University during the year of 1927; and was elected to become an instructor for them as of the school year of 1928-29.
Â