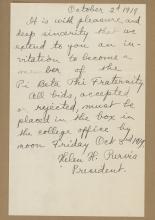 Taken from Alta Kimmel's personal scrapbook is this handwritten invitation, or bid rather, to the Pi Beta Phi fraternity for women.Â  The letter is written by the Greek organization's president, Helen Purvis, and gives instruction for acceptance or rejection of the bid.Â 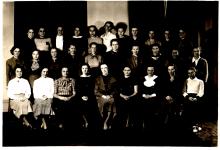 Pictured here are the ladies of the Zeta Tau Alpha Sorority in 1937.

Barbara Wishmeyer, the Dean of Women for the Academic Year 1962-1963, included photographs of her female students in her scrapbook of their pledge formal attire during the sorority rush/pledge spring season. Women had the opportunity to pledge Chi Omega, Phi Mu, Pi Beta Phi, and Zeta Tau Alpha. In these photographs from top to bottom are:
Peggy McBee
Doris Detweiler '66
Carol Frey '66
Ann Davis
Elisabeth Lane '66
Lori Shimer

From the Wishmeyer Scrapbook, this listing provides over a dozen rules and regulations for all girls rushing sororities. Things like social phone calls between upperclass women and freshmanÂ  and showing any "preference between upperclassmen and freshman or rushee or unaffiliated upperclasswoman going through rush" are absolutely forbidden. In the text here, counselors must remain impartial and not support any one sorority by wearing letters or insignia or discussing certain sororities. 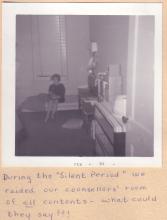 An article in the Dickinsonian announces that the local Alpha Delta Epsilon sorority voted to affiliate with the national sorority Gamma Phi Beta. The group was to be a colony as of February 9 and initiated as the Delta Rho chapter to the international sorority in May of 1980. The former President of ADE, Peggy Silberthau, said that the group was â€œlooking for more structure, support, and guidance from a strong organization which could also offer us advisors and active alumni supportâ€ and which they ultimately found in Gamma Phi Beta.

After thriving on Dickinsonâ€™s campus for twelve years, the women of Alpha Delta Epsilon saw that a change was needed and looked for â€œthe support which could be found in a national organization." A letter offering information about Dickinson College and Alpha Delta Epsilon was sent to nine different national organizations by the Associate Dean for Special Programs, Mary Watson Carson.
Â 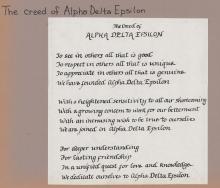 An entire page in the Alpha Delta Epsilon scrapbook is dedicated for the creed of the new organization. 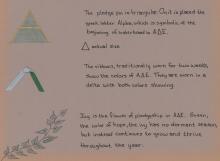 The new chapter of Alpha Delta Epsilon sorority documents a new design for their pledge pins, ribbons and their flower for pledgeship in their scrapbook.