According to the official minutes of Sui Generis, a non-exclusive women's fraternity, the Pan-Hellenic Council established changes to the rush rules for the subsequent semester.Â  According to the minutes, "There will be free association in South, but no in other eating establishments, riding in cars is OK if two or more sororities are present, double dating with a Freshman and a sorority girl is OK if arranged by the boys, and only one social service project may be advertised on campus."Â  Pan-Hel also established the length for invitational parties and what food would be served during open 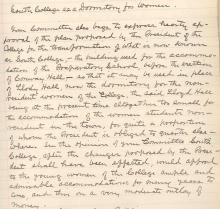